Yes yes yes….. I’ve been slack and not written one g-d darn word in aaaages.  If I wasn’t so fat and pregnant, I might actually care, but to be honest, I’ve been too friggin exhausted.  I actually think my kids are trying to kill me with lack of sleep too.  Plus my now 34 week belly seems to hold a massive party around midnight until 5 am when the baby kicks, dances, punches and hiccups allllllll night.

I’m not walking around “glowing” in floaty Laura Ashley type dress which The Captain finds sooo unattractive anyway.  No. I’m running around, exhausted, screaming at The Captain and anything else that moves.  My daughter actually pointed to my stomach yesterday and said the words “Teletubby” before imitating their dance, which in hindsight resembles a waddle (like mine at the moment).  What did I do?  Burst into tears because the hormones that are raging in my body during this pregnancy are shocking.  I’ve never been one to just burst into tears openly but here I am, blubbing away at anything.

Anyhow, this is just a quickie but I hope all your Christmases/holidays/New years were great.

Mine involved travelling to Phuket (again) for a 2 week “break” (I use that term loosely) with the family.  Yes, I still hold a huge dislike for Thailand but I never seem to win the “I FUCKING HATE THAT PLACE!” argument with the Captain.  I’m now starting to accept he has selective hearing … kinda like our Domestic Helper who chooses not to hear us when we ask her to do something that involves actual work.

Why do I hate Thailand, and yes, I appreciate I am probably one of only a few people in the whole world that does?  Well, its shit.  Its dirty. The weathers unreliable.  I’ve had very limited decent dining experiences there (unlike Bali which is fabulous), and it just seems sooo over.  I’m afraid I’m Thailand-ist.  I just don’t love the place.  Also, packing for holidays with the kids has now become a horrendous job.  I’m soo over traveling at the moment.  I just don’t have the energy.

I spent most of my joyous Christmas “break” feeling sick, dizzy and hiding during the day in our air-conditioned villa, kinda like a Vampire.  If Alcide Herveaux & Eric Northman where there from True Blood, I wouldn’t have had an issue …I’d stay there day & night just to gawk at their man parts.

I mean this mans body cannot be for real!?  The Captain assures me that if he too had a personal trainer (he does), time to work out (he does, albeit not during the week as one of us has to pay the bills), a strict diet with a cook (we now have one of those too, AKA, the new second Helper who “can follow recipes”), he too would look like a chiseled warewolf/Vampire.

Anyhow, back to my story, I was in fact soo ill that when we did go out for dinner with some friends, I had to leave the meal half way through and run out of the restaurant where I was violently sick, first in my Pashmina and then in their bushes right outside the front door.  What a great advert for that particular establishment eh? A big Teletubby pregnant bird puking her guts up right outside.  As I said, I HATE Thailand.

New Years Eve was even less eventful with us heading back to the villa by 9.30m … despite the Captains pleas to stay out for longer, with annoying statements like “this is the first NYE I’ve not gone out and got off my head”.   Errr..yeh, because I LOVE to stay in when I can be out getting drunk and partying?!   So after swiftly kicking him in the ball-sack and explaining that “I AM PREGNANT & THEREFORE  AN ANGRY BITCH ALL THE TIME”, he got a clue and ordered our Tuk tuk home. 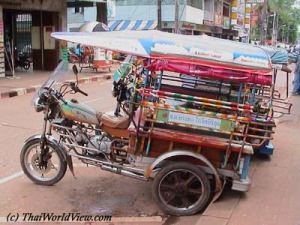 Even with all his wining and moaning about how he couldn’t believe we were going home before midnight, the man was faaaaaast asleep by 10pm in a deep carbohydrate/700g steak/red wine coma.

SOOO HAPPY NEW YEAR TO YOU ALL!   I promise to be back writing with a vengeance and my usual bitchiness once I pop this disco queen out of my vagina.  Actually I’m having a C-section …. that whole pushing thing is far too frightful for me darling.